If you find yourself dreaming of a bright sunny Christmas, then Mexico’s picture-perfect coastlines are a fabulous option for some yuletide sunshine and balmy temperatures (even the ocean during a Mexican winter invites more than your big toe). And, you won’t have to worry about missing out on Christmas spirit as Mexico does the holiday season like no other. Pretty much from December 1st until January 6th, Mexico remains in the grips of a festive fever; the country’s posadas are just one unique element that sets the destination apart. Intrigued? Read on…

Not one, but multiple Christmas parties

Most of us are familiar with the idea of the much-loved (and sometimes regrettable) Christmas party, with work events often garnering the most attention and potential for unprofessional behaviour and subsequent social media shaming. Now, just imagine having a Christmas party every evening from December 16th until Christmas Eve — that’s nine days of solid festivities! If you spend the run-up to Christmas in Mexico, especially amongst local friends (or a TripWix Ambassador), that is precisely what you can expect – a marathon of overindulgence known as the “Posada Season”.

The word “posada” in Spanish literally translates as “inn” or “lodging”. It makes reference to the biblical story of Jesus’ birth where Joseph and Mary looked for somewhere to stay in Bethlehem as Mary was just about ready to pop. Traditionally, the general purpose of the posada party is to reenact the saintly couple’s plight in finding a suitable place to stay during a time when everything in town was fully booked (unfortunately, TripWix was a couple of millennia too late to help them!). Long story short; Jesus was born in a stable.

So, back to the Mexican Posada Party … at some point during the evening, the party splits into two groups. Half the guests stand outside the front door of the venue while the other half remain inside. Guests then take turns singing their part of a traditional song through the door, bantering back and forth. The weary travellers outside knock and ask for posada only to be told there is no room at the inn. This goes on for a few rounds before the visitors are finally allowed to enter. 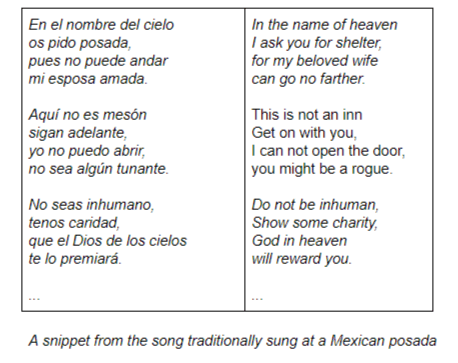 Custom has it that tamales (steamed mashed maize stuffed with meat or vegetables, then wrapped in husks) and other traditional food like buñuelos  (fried dough dipped in cinnamon) are served to guests. All of it gets washed down with ponche, (a cross between fruit punch and mulled wine), and atole, (a hot, corn-based drink usually with a chocolate or vanilla flavour).

Perhaps in the hopes of circumnavigating a hangover and any impending damage to your waistline by gaining favour in heaven, the highlight of the Mexican posada is to bash the living daylights out of a piñata (or two… or three). Before the advent of piñatas in the shape of Homer Simpson or the Grinch, a typical piñata would have had seven cones with streamers, each representing one of the seven deadly sins. The idea was to quash one’s sins before the arrival of the baby Jesus on the last posada which falls on Christmas Eve, and—of course—get to all the goodies that fall from inside the broken piñata. Fireworks are also becoming a more popular form of entertainment at fancy posada parties.

Fancy Joining in on the Fun?

If you are joining us in Mexico this Christmas or next, why not ask our concierge or your Ambassador to organize a posada for your group? We promise we won’t leave you out in the cold!